S8 is an international forum of business minds and diplomats, consisting of 8+ delegations from some of the world's most competitive small nations like Denmark, Sweden, Switzerland, Finland, Singapore, and the Netherlands. Founded by James Breiden, our goal is international economic cooperation under improved policies, and we are combatting the fallacy that bigger is better for nationhood.

The title of James’ lecture is ‘Big Lessons from Small Nations’ and he will explore the following points:

James Breiding is a Swiss-American political author and businessman with new publication Too Small to Fail: Why Small Nations Outperform Larger Ones and How They are Reshaping the World. By investigating the innovative policies of advanced small nations, Mr. Breiding’s research in Too Small To Fail explores in depth the character and qualities of places like Ireland and Singapore—offering an illuminating vision of what really makes a country “great.” 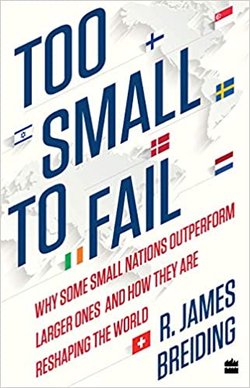 A fellow at Harvard’s Center for International Development and the Collegium Helvetica, Mr. Breiding is also the author of Swiss Made, an international best seller studying Switzerland’s rise to global prominence from humble agrarian origins. This book has been translated into numerous languages from Arabic to Vietnamese, and it is still gifted by Switzerland’s embassies worldwide.

James is also the founder and CEO of Naissance Capital in Zurich, Switzerland. His experience in global business has led him to write critically and evaluatively of international politics and economics. His writing has appeared in numerous publications, including The Economist, The Financial Times, The New York Times, The Wall Street Journal, and Foreign Affairs, and he divides his time between Zurich, Switzerland and the United States.

Most recently, Mr. Breiding has founded the international initiative S8 Nations, which takes root in his recent book Too Small To Fail and offers a global network for the world’s most advanced small nations to share their success stories. The S8 Summit takes place annually in Zurich Switzerland, and they hope to hold their inaugural event this October.