Price Wars: How The Commodities Markets Made Our Chaotic World 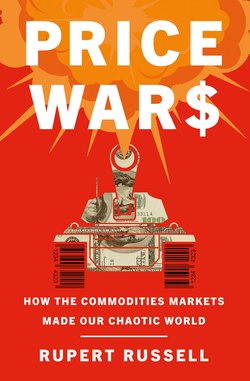 We apologise, but this webinar has been postponed from its original date of 29 November 2022. Rupert will now be appearing on the webinar Wednesday, 5 April at 11:00 BST

For Rupert Russell, the Brexit vote was only the latest shock in a decade full of them: the unstoppable war in Syria, huge migrant flows into Europe, beheadings in Iraq, children placed in cages on the U.S. border. In Price Wars, he sets out on a worldwide journey to investigate what caused the wave of chaos that consumed the world in the 2010s.

Russell travels to Tunisia, Iraq, Venezuela, Ukraine, East Africa, and Central America and discovers that unrest in all these places was triggered by dramatic and mysterious swings in the price of essential commodities. Deregulation of the commodities markets means that food prices can shoot up even in years of abundant harvests, causing hunger and protest. Oil prices and real-estate values can surge even when supplies are normal, enriching and emboldening dictators. It is this instability–fuelled by banks and hedge funds in faraway New York and London–that has toppled regimes and unsettled the West.

Price Wars is a fascinating, original, and ground-breaking exposé of the power of the commodities markets to disrupt the world.

Rupert Russell's current project, Price Wars: Adventures in the Financial Apocalypse traces the origins of the chaotic decade – from Trump and Brexit to Syria and Ukraine to the climate crisis and the global refugee crisis – back to the world’s financial markets. It is both a feature documentary film to air on Arte and a book to be published by Doubleday (PenguinRandomHouse) in the U.S. and Weidenfeld & Nicolson (Hachette) in the U.K.

​His feature debut, Freedom for the Wolf, charted the global crisis of democracy, won the Audience Award at the Slamdance Film Festival and was nominated for the Cinema for Peace ‘Most Valuable Film of the Year’ Award during Berlinale 2019.

His animated series on the Trump phenomenon, How the World Went Mad, premiered at Sheffield Doc/Fest and earned him a spot on the shortlist for the Young Director Award at Cannes Lions 2019.

​He received a Double-Starred First in the Social and Political Sciences from Jesus College, Cambridge, and a Ph.D. from Harvard University in Sociology, where he was National Science Foundation Graduate Research Fellow.